“Flip the Pyramid zooms in on the core tasks for any organization that wants to endure: To identify the core values that guide decision-making, and to develop the discipline and teamwork necessary to live out those values hour by hour, day to day, and year by year. The principles behind this book set a high standard. The advice and examples in it tell you how to reach that standard.”

— Daniel Pink, author of DRIVE and TO SELL IS HUMAN

“This is a practical how-to book on getting the best from your team written by someone who has been there and done it.”

— Verne Harnish, author of MASTERING THE ROCKEFELLER HABITS and THE GREATEST BUSINESS DECISSIONS OF ALL TIME 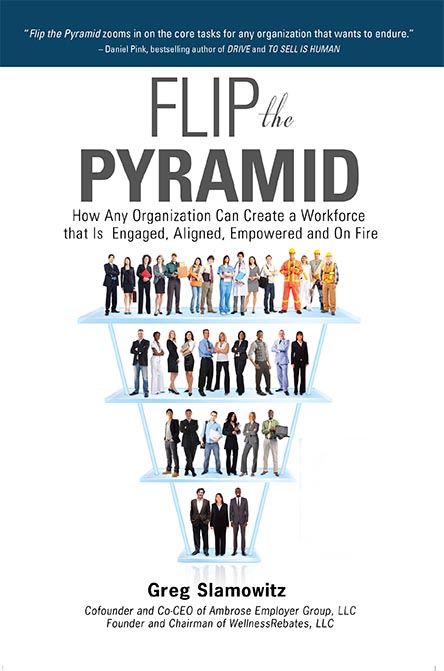 Greg Slamowitz (www.gregslamowitz.com) is an entrepreneur, investor, author and speaker. He was a co-founder and former Co-CEO of Ambrose Employer Group, LLC, a professional employer organization (PEO), which was ranked among Crain’s New York’s list of the 50 fastest growing companies and was also recognized by the New York State Society for Human Resource Management as one of the “Best Companies to Work For in New York.” Greg co-founded Ambrose in 1997 with $95,000, never accepted outside funding, and sold Ambrose to Trinet (TNET) in July 2013 in a $200 million cash transaction. Greg has also invested in, and is on the board of, a number of early stage companies. Greg enjoys learning and teaching and has spent considerable time over the last several years meeting with entrepreneurs and business leaders and regularly presents his seminar, “Flip the Pyramid”, around the United States. Read about Greg’s presentation to the Morris (NJ) Tech Meetup. http://bit.ly/1rxbxB8 Greg’s book titled “Flip the Pyramid: How Any Organization Can Create a Workforce That Is Engaged, Empowered, Aligned and On Fire!” is available on Amazon, Barnes & Noble and iTunes/iBooks. http://amzn.to/ZrNw8a Greg has also spent considerable time in Washington DC with members and staffers of the U.S. Senate and House of Representatives educated them about the challenges to and solutions for America’s businesses. He was a board member and president of the his industry’s trade association and founded and led its political action committee (PAC). Greg was instrumental in the passage of the Small Business Efficiency Act. http://bit.ly/1vprSd1 Greg is passionate about helping America’s businesses focus on growth, profit, hiring and creating an awesome and healthy experience for each and every working American. Greg was the recipient of the 2001 Ernst & Young New York Entrepreneur of the Year® award in the employment services category. Greg also serves on the Dean’s Advisory Board for Emory University’s School of Law. Prior to co-founding Ambrose in 1997, Greg practiced tax law with Brown & Wood (now Sidley Austin Brown & Wood) in New York City. He holds two law degrees – a Master of Laws in Taxation from New York University School of Law, and a Juris Doctorate, with distinction, from Emory University School of Law in Atlanta. He received his undergraduate degree, cum laude, from New York University. Please visit Greg’s website www.gregslamowitz.com, his LinkedIn Profile and Twitter @gregslamowitz His passions include developing highly functional organizations, engaged cultures, growth companies, health care and wellness, skiing and sailing (www.teammanitou.com) END_OF_DOCUMENT_TOKEN_TO_BE_REPLACED
This entry was posted on Thursday, January 24th, 2013 at 10:48 am and posted in Flip the Pyramid Now Available. You can follow any responses to this entry through the RSS 2.0 feed.
“Flip The Pyramid” Now Available at Amazon, Barnes & Noble and iTunes »